Reinventing the experience of live shows 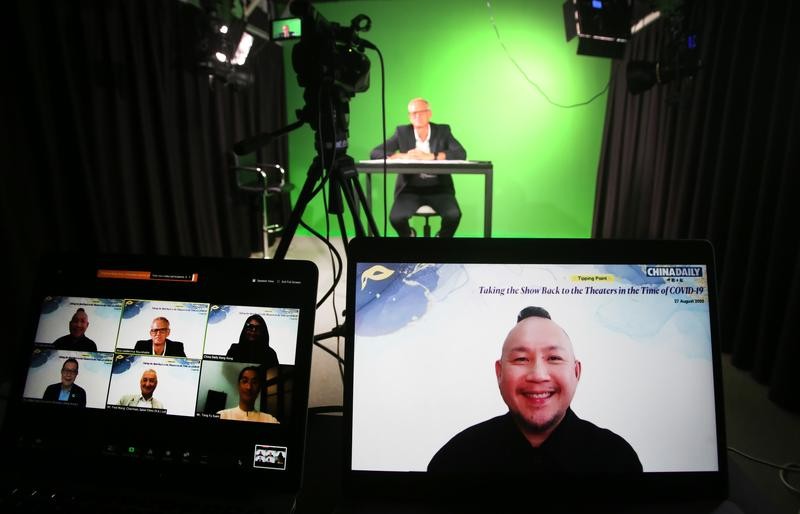 Hong Kong’s theater business has gone through a proactive model transformation, hoping to stay afloat amid the coronavirus pandemic, and the reopening of cinemas today after being shut for around six months is a day that’s long anticipated. When the theater drapes and stage curtains are raised again, it will thrill not only avid local movie fans, but also those in the creative industries. Industry leaders espoused their views at a webinar on Thursday, organized as part of the China Daily Leadership Roundtable’s Tipping Point series titled “Taking the show back to the theaters in the time of COVID-19”, in which key players share their thoughts on ways of restoring artistes’ livelihoods in the long and short term. Albert Lee, executive director of the Hong Kong International Film Festival Society, which organizes the annual Hong Kong International Film Festival, hailed the Hong Kong government’s decision to reopen cinemas that were forced to close as the third wave of COVID-19 infections struck the city, saying the organization is very reliant on screening revenues. The sad news is that this year’s 44th HKIFF has been put off by the pandemic. “It’s the first time in history the festival has been postponed,” he said. Engage the audience The stringent social distancing measures in place to curb the spread of the coronavirus have inflicted an indelible wound on the creative sector, with live performances scrapped or put on ice, and theaters shut. People in show business have borne the brunt of the scourge. On the bright sight, however, the creative business has leveraged its creativity and resilience, securing promising answers to the conundrum. The theater community has pushed the boundaries to try to engage the audience, said Low Kee-hong, head of theater (performing arts) of the West Kowloon Cultural District Authority — Hong Kong’s world-class arts and culture hub. “What we’re doing is not just about a stopgap measure but, essentially, a combination of digital live (performances) and a presentation of other unusual platforms like gaming, and even analog space,” he said. Theaters around the world have demonstrated their creativity, introducing “pods” or “cubicles” accommodating four to five audience members to enjoy the show, said Low. “There’re also drive-in cinemas, concerts and museums for visualized exhibitions.” Tang Fu Kuen, curator of the Taipei Arts Festival, told the webinar that global performance producers are also inspired to experiment with multiple forms and formats, and a new medium of communication between artists and audiences. He highlighted the importance of keeping theaters’ physical spaces in use during a public health crisis, rather than just freezing all of them overnight. “So long as theaters are running, it’ll keep the phase going. And you’ll still keep some livelihoods, some jobs and a sense of survival of the whole industry.” Tang called on all governments to exert the will, and put in place a set of policies to protect these physical spaces. Make better use of theaters Fred Wang, chairman of pan-Asian facilities and movie services group Salon Films (Hong Kong) Ltd, believes the pandemic offers a good opportunity to rethink the question of how to make better use of well-located theaters, especially in a densely populated city like Hong Kong. Unlike 50 years ago, when opening theaters was seen as the main business for Hong Kong property developers, the theater business today is taking a back seat, he said. “But the general public should have a good venue that not only allows them to enjoy the films, but also can be multiple-purposed, whether it’s for games, musical presentations or even for government lecturing and voting,” said Wang, who founded the company in 1969 and had worked with various major Hollywood film and television companies in setting up projects in Asia. “Nowadays, everything is digital. Films can be distributed in multiple languages, multiple formats and multiple locations. This really makes the film industry not just for entertainment, but changing our whole lifestyle,” he said. The industry itself today welcomes all sorts of new things with an open mind. However, Wang pointed out that none of these will become “mainstream in the short time”. The sheer power of new technologies is only part of the story. “You also need a strong production company to make use of them and the infrastructure ready for distributing your program. Then, you need a marketing team that can draw a lot of audiences to see your program. “That’s why I said we should let the market try a lot of new things. But we also call for combined support from all parties that can sustain to essentially build up a new industry,” said Wang. Physical irreplaceable sophisticated technology has brought the virtual alternatives to a higher plane. The incorporation of virtual reality and augmented reality has more than emulated the physical viewing experience. It has enhanced it to be more immersive, interactive and individualized. And the experience is easily accessible from the comfort of home, without even stepping out of the house. Despite the immersive satisfaction and great ease, physical shows can never be substituted by the digital answers, said Hong Kong film director and producer Teddy Chen. He said there’s a nuance between watching a movie or performance in a physical venue and enjoying it virtually. The difference lies in the “social bond” created by social gatherings. “Young people like watching a movie together after work. … The movie provides a common topic for them to discuss, through which their relationship is getting closer.” Contact the writers at jenny@chinadailyhk.com