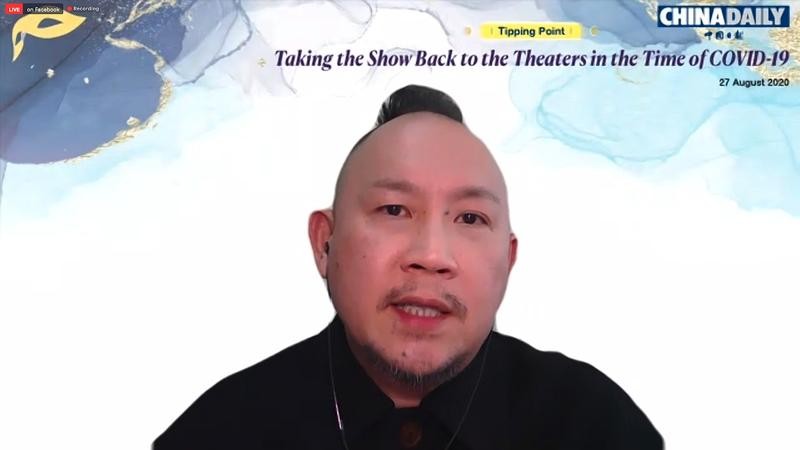 With the COVID-19 pandemic still raging globally, forcing live theater or public space experiences to be replaced by digital art performances, Hong Kong artists and curators are beginning to reimagine the relationship between digital and physical space while making multiple explorations. “When we re-imagine in the digital space during these unprecedented times, it’s not about one discussion, but the idea that the digital space becomes a part of how we think about live performances,” said Low Kee Hong, head of theater (performing arts) at the West Kowloon Cultural District Authority, which manages the city’s cultural and arts hub, West Kowloon Cultural District. Amid the stringent social distancing measures in place to curb the spread of the coronavirus, the arts hub has teamed up with Edward Lam Dance Theatre to produce a series of short films called On Empty Theatre. Some 30 Hong Kong-based artists from various backgrounds were invited to place themselves in the empty Freespace’s black box theater to present a short unrehearsed monologue. “The idea was to draw from these artists’ voices about their own feelings of the theater and the current situation,” said Low. The team tried not to prepare the actors as much as possible before they entered the theater so they could respond immediately and intuitively when facing an empty auditorium. The film series was released online in August, drawing an overwhelming global response. “I think the feelings, emotions and thoughts the project has brought could resonate with lots of people worldwide,” he said. The world public-health crisis has wreaked havoc across all industries, and the cultural and arts sector is no exception as audiences stay away from theaters. With no one in a position to predict when the pandemic will end, Low said the industry is pondering over how to coexist with the “new normal”. When the third wave of COVID-19 infections hit Hong Kong, Low and his team immediately turned to the WKCD’s digital assets that can be deployed online to engage audiences. At the same time, the artists and curators began organizing livestreams to engage audiences and share tips on pandemic prevention. Although the WKCD has relied heavily on digital platforms to connect with audiences during the pandemic, Low argued that going digital can never replace live performances, especially for the arts hub, which runs theaters and curates programs at its venue. In between the second and third waves of coronavirus infections in Hong Kong, when most art performances and exhibitions returned to normal, Low said admission tickets sold well not only for WKCD, but also for other venues in the city. “We could see the audience was eager to get back to the theaters for physical social interaction,” Low said, and he expects artists to get back to the stage and interact with the audience face-to-face soon with safety measures in place. Having gone through tough times, the industry would definitely be able think about multiple formats for performances at the same time, while engaging different types of audiences when the theaters reopen, he said. In Low’s view, 2020 is the year for Hong Kong to heal and recover considering what it has been through in the past year. Besides, he believes the pandemic has provided an opportunity for artists to explore the local cultural heritage deeper. pamelalin@chinadailyhk.com