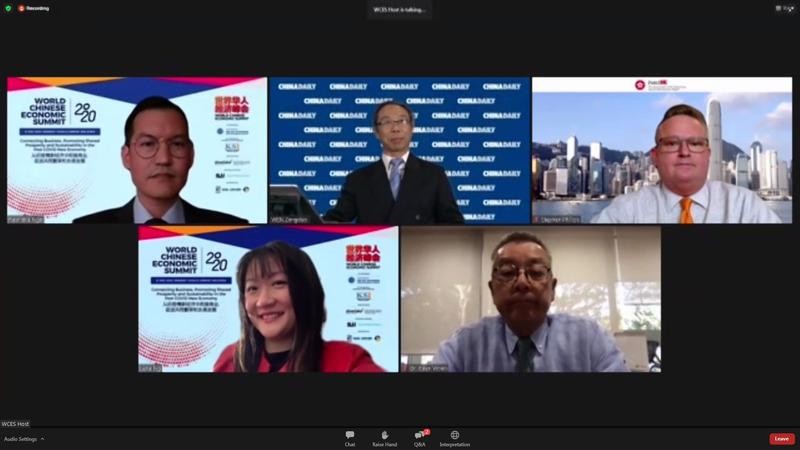 HONG KONG - The Guangdong-Hong Kong-Macao Greater Bay Area and the Association of Southeast Asian Nations working together can drive not only the region’s economic growth but also keep the world supply chains busy, members of a panel at the 2020 World Chinese Economic Summit said on Monday. “With this close connection, ASEAN countries are in the best position to draw momentum from China’s new development pattern and seize the opportunities,” said Wilfred Wong Ying-wai, president and executive director of Sands China and former chairman of the Pacific Basin Economic Council. The combination of the Chinese mainland’s vast resources and market, and the Hong Kong and Macao administrative regions’ international connections, as well as their respective centers of excellence, “make it a worthwhile destination for ASEAN business expansions”, Wong told the closing plenary session by video. ASEAN groups Brunei Darussalam, Cambodia, Indonesia, Lao, Malaysia, Myanmar, the Philippines, Singapore, Thailand and Vietnam in Southeast Asia. It is important to have a small analysis of “what” and “where” before going into the Bay Area to avoid being “downed”, Wong said. Also addressing the session on “The Greater Bay Area and ASEAN — Maximizing Opportunities and Collaboration”, Stephen Phillips, director-general of Invest Hong Kong, highlighted the advantages of Hong Kong for the region, including financial services and investment, innovation and technology, logistics and law, culture and education, tourism, and medical care. The areas serve the two-way flow of capital, people and goods, Phillips said. Moreover, the integration of Hong Kong into the Bay Area will strengthen and enrich Hong Kong’s role as the global super-connector. Linda Chen, vice-chairman and executive director of Wynn Macau and the president and executive director of Wynn Resorts (Macau) SA, said that the Bay Area serves as a bridge into the whole of China for ASEAN companies, while Chinese companies continue to show a strong appetite to invest and collaborate with them across diverse areas. Chen said she firmly believes that there’s significant potential for greater engagement between ASEAN members and Macao as well as other Bay Area cities, and that Macao’s entertainment and tourism development will attract global visitors after the pandemic. Ravindra Ngo, founder and CEO of Hong Kong-based Invest in Cambodia, said he helps the businesses and entrepreneurs in the Bay Area and ASEAN work together through opportunities, such as economic partnerships, and the challenges, including the trade tensions between China and the United States, COVID-19, and the poor digital infrastructure and internet access in ASEAN. He proposed the growth of digital technologies, digital currencies and e-trade as catalysts for innovation and startups as synergies for enhancing the ties. Lena Ng, chief investment officer of Amata Corp PCL in Thailand, shared her recipe for success with those with ambitions in ASEAN: “You need to constantly change, and be very open to new environments and new concepts. You’ll be empowered by a good understanding of what ASEAN is really like.” She cited partnerships, places, promotions and products as key works for joint development. Eden Woon, president of the Asian Institute of Technology in Bangkok, said the future of the region depends on further development and more youth exchanges, including those involving students. AIT has joined Chinese mainland businesses with exchange programs for students. In the coming years, Hong Kong should pay more attention to the Belt and Road countries and ASEAN instead of its traditional focus on the Western economies, Woon said. COVID-19 has provided a window of opportunity for higher education and human resources training, attracting more young talents to both regions, he said. He said that in terms of recruitment, universities can get good-quality students in their own countries, as in the past the top students went to the United Kingdom or the United States mostly; for talent flow, there’s the reverse brain drain for the region to get the most accomplished researchers; for foreign exposure, it can be maximized through technology with more virtual tours and remote conversations. Contact the writer at vivienxu@chinadailyapac.com